Excerpt #2 from FALLING IN BETWEEN 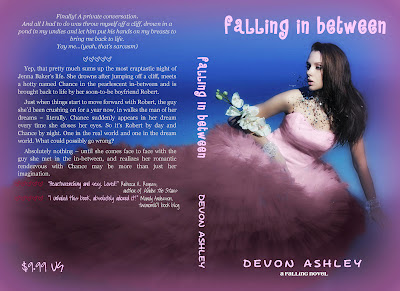 click to enlarge
Have you read Falling In Between yet? If not, I'm running a few excerpts this week for you to check out!
NEW ADULT PARANORMAL ROMANCE
(and by Paranormal, I mean old school PN, not supernatural creatures)
(and by New Adult, I mean Mature YA..cause it gets pretty hawt at times! 17 & up guys!)

Another excerpt for Jenna and Robert from chapter

“So tell me. Last year when we had English Lit together...”
“Yeah?” I confirmed.
“Exactly how long had you been watching me in class before I caught you that first time?”
I think my heart literally fell into my stomach;  like  it  jumped ship, suicide-bombed, jumped without a parachute (you get the idea). I know my body froze, which wasn’t gonna help me lie my way out of this. Robert had sat one chair up and two rows to my right and I spent quite a bit of time gazing at him. It worked perfectly, being right handed – I simply used my left arm to brace my head at an angle towards him while I wrote. Most people would’ve assumed I was looking down at my paper and not at him.
I was about to open my mouth and deny any wrong-gazing, when he cut me off with, “Before you answer that question, I want you to recall who was sitting in the chair behind you, in the row between us.
I narrowed my eyes and tried to recall. I spent so much time watching Robert I paid little attention to anyone else. But…I gasped. “Jhett!”
“That’s right.” The curvature of his lips was just evil. He knew he had me. Jhett had a perfect view of me just like I had a perfect view of Robert. Damn! Damn you small school with your small classes where everyone knows everyone else and totally rats you out!
I opened my mouth but when he lifted his eyebrows at me in anticipation I chickened out.
“Yeah, that’s what I thought.”
“Uh…”
He laughed and slowly walked towards me. Scratch that. Swaggered. There was definitely some swaggering to those steps.  “Uh,  is  not  a number. Come on. I already know the number, I just want to hear you say it.”
It completely flustered me the way he neared.  He took slow, purposeful steps, and he refused to divert his eyes elsewhere, like he was enjoying watching me squirm and back myself against the tree.
“One. Little. Number.” He perched an arm beside me and used it to lean his body against the tree. I’d be lying if I said my eyes didn’t sneak a quick peek at his chest as he leaned in closer. The heat of his body brought the hairs on my skin to stand at attention, the smell of the citrus in his cologne made my stomach do flip-turns, and the glint in his eyes seemed to captivate mine into submission.
I licked my lips slowly. He already knew so there was no avoiding it anyway. “November, probably.”
“Thank you.” His free hand caressed my cheek and his lips gently brushed mine. His kisses were slow and controlled, and once his lips skimmed mine a few more times, his tongue slid into my mouth. A ticklish vibration spread behind my neck and through my lower abdomen. He pulled away just as I was ready to reach out and bring him closer.
“November? Really? Man, I didn’t catch you until March.”
“Wait. What? I thought Jhett ratted me out.”
He huffed. “Please. Jhett would never notice something like that. Lit bores him. He was probably in a daze the whole time.”
If he were still wearing a shirt, this was the point where I would’ve forcefully grabbed the collar and yanked him toward me, just to tighten the cotton’s grasp around his neck. Instead, all I could do was grunt my disapproval and kiss him before his smile got any bigger.

Like what you read? You can find the links where Falling In Between is sold right here!
ebooks are just $2.99!
And DON'T READ the description for FALLING AWAY!
That'll spoil all the fun!