The Ordained Blog Tour is now underway! To celebrate, I'll be giving away a couple of paperbacks, several eBooks and lots of bookmarks at various sites. To find out where to enter, just head over to my tour page! 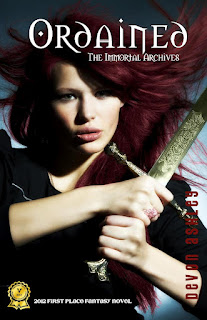 
Abby Sorrensten likes to play rough. Ripping the horns off the heads of demons, manipulating lightning and setting things on fire with the flick of your wrist can give you a serious rush. So she probably wasn't the best choice for the Order's experimental training program. Thirteen years of isolation, lack of affection and a bruised and broken body from horrendous training sessions creates more than just an exceptional fighter. It creates an evil within - an evil responsible for the several deaths the night she left.

I am so excited! Ever since I seen this book and the trailer for it, I have wanted it! I am going to enter as many giveaways as I can!