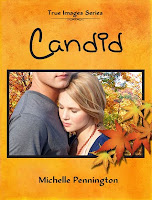 Synopsis: Life is simple for high school senior, Sienna Whitfield. With a few good friends, a camera, and a dream, she has everything she needs to be happy. But when Jordan Rubio, the most popular girl at Haskins High, makes her mad, she decides to use the power of photography to right a few social wrongs. As if that doesn’t cause enough drama in her life, she realizes she’s falling for the new guy, Lee Franklin. Strong and protective, he’s just what she needs to survive the craziness she’s stirred up at school. If only she didn’t have to keep her feelings for Lee a secret from her mom…

This being a debut novel that didn't have any reviews going in, I wasn't really sure what I was getting myself into. Turns out, I was actually pleasantly surprised. :) I began Candid late one night and stayed up a few hours to read it all the way through...cause I just couldn't seem to put it down. Sienna is your typical girl-next-door senior, easily getting by the social war zone of high school by staying under the radar. But when she takes the job to photograph the football team's home games, trouble stirs up between her and the queen bee of the school, little miss cheerleading captain Jordan. So...Sienna decides it's time to kick the bee's nest and see if she can use her photography blog's newfound popularity to change the perception the student body has on a couple of people. And no, I don't mean finding the most humiliating pictures and poking fun, but spotlighting the kinder people that hang with the popular crowd. Dethroning the queen...who hasn't wanted to do that at one point in their lives?

As much fun as it is to watch the popular crowd squirm, what I really loved about this novel was the growing attraction between Sienna and Lee, the new hottie in school that seemed to have his eyes solely on Sienna, much to the popular crowd's dismay. Only problem was, her mom didn't allow her to date, cause for some reason (ie. mommy's past hormonal mistakes) all teenagers are horny, can't control their urges, are doomed to throw themselves at one another and pop out a kid. Yeah...um...I didn't have that problem in high school Did you?  Unfortunately for Sienna, her mom doesn't listen to reason, or believe her when she says that she and Lee aren't looking to jump into that any time soon. She tries to respect her mom's wishes, cause she before Lee, she actually agreed dating in high school and getting emotionally attached to a guy wasn't worth risking the future she had planned out. But now that she's met Lee...well that kind of thinking was just plain silly!

All in all, really cute book. Guess it was since I couldn't put it down. And any book that can keep me up late cause I absolutely want to know NOW what's going to happen, gets five stars in my book.

Novel provided by author for honest review.
Posted by Devon Ashley at 12:00 AM