This week at The Writer's Block I have debut novelist Michelle Pennington. She's fresh on the scene with Candid, the first book in the True Images series. She's a shark week finatic, and Super Mom, who's not afraid to let the kiddos veg out in front of the TV to get some writing time in! And as Christmas-obsessed as she is, she's probably one of those people ready to knock you down for that Black Friday deal. :P Let's take a few minutes to get know this overworked mommy. 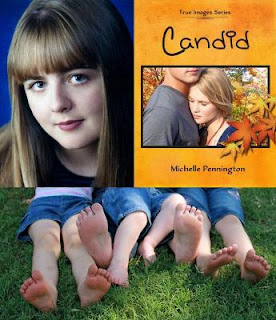 What is your favorite genre to read and what makes it so awesome? I love to read many genres, but if a book doesn’t have romance in it, I have a hard time getting into it. Conversely, I’m really picky when it comes to the kind of romances I’ll read because they have to be clean. I am a sucker for those moments in a romance where your heart swells up so that you can barely breathe and you have to take a moment to gather yourself so that you can fully appreciate the storm of gooey emotions in a good love scene. I love the moment when they confess their love for each other. Nothing beats that.

Tell us your favorite author. Which book is your total fave from that author? My favorite author is Georgette Heyer. She’s the queen of regency romance and no one will ever match her wit or story crafting – at least in my eyes. Choosing a favorite among the gems of her books is like trying to choose which of my children is my favorite. Since I have three kids, I’ll try to narrow it down to that many: The Masqueraders, The Nonesuch, and Devil’s Cub.

Any pet peeves you'd be willing to share? If we’re talking about life in general, it’s when my husband asks what the kids are up to in another part of the house when I’m in the same room he’s in. Seriously, does he think I can see through walls? If we’re talking about writing, I hate when an author tells you the same thing over and over and over again.

If the Earth suddenly became uninhabitable, would you rather live under the sea or in space? I confess that I would choose under the sea. For one thing, I always had a fascination for Marine Biology, but since I grew up in Arkansas, I didn’t see that I had much chance up competing in the field against people who grew up with the sea in their back yard. I still watch every documentary on the oceans, marine animals, and I’m a Shark Week fanatic.

Take us through a typical writing day for you. I write early in the morning before my kids wake up and my day gets crazy. I admit that I let them veg on the couch in front of cartoons for a while if they wake up too early so I can get my writing time in. When I wake up, I’m alert and full of ideas. I turn on some music, open my laptop on my kitchen table and zone for as long as life lets me.

What do you do when you experience that lovely problem called writer's block? In college, I was taught that writing block was caused by not knowing who your audience was. I’ve found that there’s sometimes some truth in that. If I let pressure from writing a story that so and so would like affect me, I stop listening to my gut and my characters’ voices. Sometimes, I just get ahead of my brains’ advance work. (when it’s thinking on its own without any interference from my conscious self) and I just have to go do something else for a while until it catches up. It’s a weird feeling to realize that so much of what I write comes from a part of me that I don’t control. I guess writing is taking that unconscious part and translating it for other people to understand.

What is the craziest dream you've ever had? I live in tornado country, and I’ve never been afraid of tornados. I do have a healthy respect and awe for them though and I have recurring dreams about them. I’m always hunkered down in a building somewhere, watching a tornado spin towards me while my heart is about to beat out of my chest. It gets closer and closer, the building expands and contracts like a pair of lungs, the wind roars and things start to get really surreal right before it hits. Then the darn thing bounces of the window and goes another direction. It’s pretty anti-climactic, but always a relief. If anyone can tell me if this means something, I’d love to know.

If you could live anywhere in the world you'd like, where would that be and why? I’d live on Roatan Island, Honduras because it’s a dream of my hubsand's to live there. Anywhere he goes, I go, and I have to admit, it would be pretty fabulous to live there.

Do you have a secret obsession you'd be willing to share? <wink, wink> Christmas. That’s right, Christmas. Everything about it. Especially the music.

What food/drink would absolutely devastate you if they stopped production on? I’m not sure if it qualifies as a food or a drink. It’s kind of a food, but I do drink it. La Martinique French Vinaigrette. I pour too much on my salads just so I can slurp up what’s left at the bottom of the bowl. My local grocery stores don’t carry it, so I drive over to the neighboring town to stock up occasionally. The cashiers probably think I’m crazy to buy so many bottles at once. One time I couldn’t find it because they rearranged the shelves and I almost had a heart attack that they weren’t carrying it anymore.

Do you like to listen to music when you read or write? Tell us a few of your favorites. It’s almost impossible for me to write without music. I’ve got different playlists for different moods or situations. Some of my songs range from “Gravity” by Sara Bareilles to “Fallin’ for You” by Colbie Caillat to “All of Me” by Evanescence.

Which do you prefer: ebook, hardback or paperback? I love the feel and smell and comfort of a physical book, though I prefer to read paperback over hardback. I have to say though, I’ve been totally converted to ebooks the last few years though since I got my kindle. Benefits include: I can buy them whenever I want. I can afford more books. My kids don’t turn the pages or rip them out. I can take it anywhere and have a whole library of books with me. Nobody makes fun of me for reading a romance with a cheesy cover on it. Most importantly, my husband doesn’t knock my book out of my hands so that I lose my place. He thinks it’s hilarious to bug me like that, (so annoying!) but he doesn’t want to break my kindle, so I’m safe. Once my brother even threw my book out the car window while we were driving down the highway at 70 mph! He would never have done that to a Kindle, so if you have men in your life like the ones in my life, ebooks are the way to go.

This or That
Sweet or Salty – I like Sweet and Salty together…I always add ¼ to ½ tsp of extra salt to my cookie dough recipes.
Drama or Comedy – Comedy all the way.
Fantasy or Romance – Romance, but put the two together and I’m so there
Autumn or Rain
Tree house or Man Cave – Hello Swiss Family Robinson

Candid was a really cute read that I just breezed through in one sitting. I highly recommend picking it up, and you can check out my review here.

Email ThisBlogThis!Share to TwitterShare to FacebookShare to Pinterest
Labels: The Writer's Block