The Weepers by Suzanne Winnacker (ARC)

Synopsis: 3 years, 1 month, 1 week and 6 days since I’d seen daylight. One-fifth of my life. 98,409,602 seconds since the heavy, steel door had fallen shut and sealed us off from the world

Sherry has lived with her family in a sealed bunker since things went wrong up above. But when they run out of food, Sherry and her dad must venture outside. There they find a world of devastation, desolation...and the Weepers: savage, mutant killers.

When Sherry's dad is snatched, she joins forces with gorgeous but troubled Joshua - an Avenger, determined to destroy the Weepers.

But can Sherry keep her family and Joshua safe, when his desire for vengeance threatens them all?

Remember Will Smith in I Am Legend? Yeah, it's a lot like that.

Sherry and her family managed to live in their LA bunker for more than three years before they ran out of food. Their part of the country was ravaged by a new strain of rabies, one that only one in ten were immune to. The other nine? Well, if they were lucky, they died. But a lot turned into a rabid, intelligent version of a zombie (the infected actually remind me of those in I Am Legend) 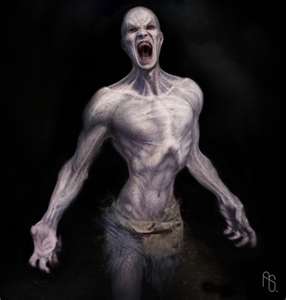 Not gonna lie. I'd wet myself just thinking I'm gonna run into this guy. Hope it's some place dark so I won't see it coming!

So Sherry and her dad are forced to go topside. Not only do they need food but it's been a few months since they've managed to reach anyone on their transistor radio. They encounter a few Weepers in the local Wal-Mart and Sherry's dad does a disappearing act. The only reason Sherry survives the Weepers is Joshua. He takes her to a place outside of town called the Safe-Haven. Sounds safe, right? Heh heh. If I spent the past three plus years hiding out in a bunker, I'd be a little weary about sleeping in a bed all by myself with a window in a farm house in the middle of nowhere. I'm no fool - I'd be sleeping like this: 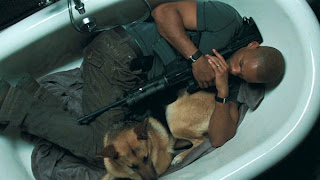 But hey, that's Sherry's mistake. I value my life and a decent night's sleep.

The rest of the novel is spent trying to move her family to new location and searching the known Weeper nests for her father, who she hopes is still alive. There's a little romance brewing between Sherry and Joshua. Normally I would say relationships that begin under extreme circumstances never work out (yes, I'm quoting Speed here) but seeing how the population has pretty much dwindled to nothing, I'm thinking these two may find a way to make it work. As for the plot, there's not really much there in the way of sub-plots and the main plot is less than stellar and been done before. But I will say that The Weepers was a fast read that kept my attention, and I pretty much read it in one sitting.

Novel provided by publisher via NetGalley.
Posted by Devon Ashley at 12:00 AM