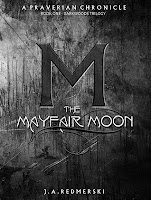 Synopsis: After a nightmarish encounter with a werewolf, seventeen-year-old Adria Dawson loses her sister, but gains the love of a mysterious young man and his legendary family.

Strange and tragic things begin to happen in the small town of Hallowell, Maine: residents come down with an unexplainable ‘illness’ and some disappear. In the midst of everything, Isaac Mayfair is adamant about keeping Adria safe, even from her sister whom he has warned her to stay away from.

As unspeakable secrets unfold all around Adria, impossible choices become hers to bear. Ultimately, no matter what path she takes, her life and the lives of those she loves will be in peril. As she learns about the werewolf world she also learns why her place in it will change the destinies of many.

I've noticed the reviews comparing this book to Twilight alot...and it so is! At least in terms of the romance moving a little fast and leaving you wondering why the attraction is so strong after so little; but in terms of the story, The Mayfair Moon is soooo much freakin' better! Seriously. And I kinda hate that I just read this...cause if I had waited a little bit longer, I wouldn't have to twiddle my thumbs the next several months waiting for Kindred to come out!

<twiddles thumbs...Is it ready yet?>

Adria and Alex are incredibly close sisters, that is until they're attacked by what appears to be a werewolf. Both tend to keep to themselves in the beginning while they deal with the shock, but their sudden beat-up appearance in a home people know have an unstable step-father gets them removed and sent to their aunt and uncle in Maine. But trouble seems to follow. Alex won't come out of her room and shuts Adria off completely. Then one night Adria witnesses her sneak out, meet up with a group of creepy guys and doesn't come back. And since Alex is eighteen, no one can do anything.

Adria tries to move forward, but things around her are weird, especially this group of people that moved to Maine right after she did - the Mayfairs...who apparently have more than blood relatives in their family. Every month they disappear for a week with no other reason than being sick. People in the community are coming down with mysterious illnesses as well, some resulting in death. When Adria's world begins to mix with the Mayfair family, she finds a close friend in Zia and a love interest in Isaac. But as her love life gets better, every other aspect goes to crap.

The Mayfair Moon was filled with unexpected surprises and it had a little bit of the gore I've been missing in other werewolf books. And Redmerski gives us a great peek into the life of a werewolf clan, first from the outsider's perspective, then from the insider's perspective, which makes it all more enjoyable to find out what exactly it is their protecting.

But seriously, if you were addicted to Twilight in any manner, you're gonna love this book. Sadly, I hate comparing The Mayfair Moon to Twilight because I think it's so much better. I don't know if Redmerski tried submitting this to literary agents, but if she did, this fell through the cracks big time and those agents should be smacked!

And I KNOW what Isaac did in the last few pages of the novel! GASP! Oh, I can't wait to see the fallout for that one!

Novel provided by author for honest review - Thank the Lord!

Amazing!! I liked the Twilight series, but I thought it had a lot of dry spots. I loved the last book though!! It sounds like a great read and I have a special for weres :)

I loved Twilight so I guess I would love this too. Sounds creepy goory, and some action. Love werewolves anyway!!

I am a Twilight fan, too, so I'm always up for similar stories. This one sounds like it will fit the bill nicely.

Great review! I like werewolf stories and am glad to hear you say that this book is full of surprises! Sounds perfect for me!

Great review! I've never been a huge Twilight fan (mainly because of how badly it's written.. hah) but I'm always interested in reading new books! Especially if, as you say, it's an improvement on Twilight. Sounds like an intriguing plotline as well!

This does sound alot better. I can't wait to read it.