Interview and (US) Giveaway for Veronica Blade, Author of Something Witchy This Way Comes

Yay! Another Jane Austen admirer! This week on the Writer's Block we have the lovely Veronica Blade, author of several romance novels. I recently got to read Something Witchy This Way Comes and absolutely loved it (you can check out my review here). Let's a few minutes to get to know this woman who would totally knock off Elena to get her mitts on Damon (Bleh heh heh - who wouldn't!) 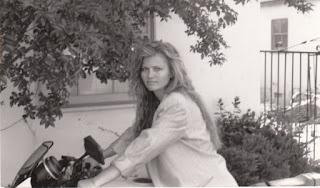 What is your favorite genre to read and what makes it so awesome? I love anything and everything related to the Young Adult genre, whether it’s books, movies or TV shows. There’s something so fresh about it. With YA, I’m not reading about the kids, the hubby, the mortgage, or the company, etc. I get that every day — I don’t want to read about it too!

If you could meet any dead person, who would you choose? Any particular reason why? Jane Austin, because I’m so impressed with that she accomplished and that her work is still admired after all this time — especially by me.

What was your most favorite pastime as a kid? I drew a lot and made animals out of clay. I used to do that for hours!

If you could live in any time period other than the present, which would you choose and why? I don’t think I could live in the past. I’m much too outspoken to survive in a time where women didn’t have a voice. But if I had to pick a time, I’d probably pick the old west where I could at least tote a gun.

What do you do when you experience that lovely problem called writer's block? I step away and hopefully gain objectivity. But when it doesn’t go away, that usually means something about the plot is really wrong and I need to work it out or start over. Writer’s block is rare for me though. I’m one of those obsessive writers who lives and breathes her stories/characters. When I’m driving, the radio is off and I’m making mental notes on my WIP. Same with the shower or when I’m waiting in line at the grocery story. My brain is always going, so by the time I get on my laptop, I have plenty to write about.

When you were little, what did you think you'd be when you grew up? An actress or singer. Not sure what I was thinking at the time — I was way too shy as a kid to do either of those things. Pffft!

Do you have a secret obsession you'd be willing to share? <wink, wink> Channing Tatum… except that my obsession isn’t really a secret!

What food/drink would absolutely devastate you if they stopped production on? Dr. Pepper. I’m a total junkie!

If you could step into the shoes of any fictional character for one day, who would it be and why? I’d be Elena from The Vampire Diaries and I’d totally give Damon what he’s been wanting. It would be quite a hardship on me, I’m sure, but I’m very generous that way :-P

Which is your favorite fairytale? Cinderella. My favorite retelling is Ever After. *big sigh*

Which do you prefer: ebook, hardback or paperback? Hardback is too awkward to handle when I’m reading in bed and too heavy to carry around. These days I’m hooked on my Kindle Fire, because if one book isn’t hooking me, I can go to straight to the next one.

Underworld or Twilight  :Because with me, it’s all about the romance, which Twilight had plenty of.
Original or Remake: It depends. Some remakes are great, but others can’t be outdone, like The Matrix.
Sweet or Salty : But I like both.
Drama or Comedy : Dramas are too depressing. And don’t we get enough of that in the real world?
Fantasy or Romance : It’s all about the romance.
Spring or Autumn : Because you’ve just finished a long winter and that first warm day makes you feel like you have a new life. Plus, the flowers are blooming and who doesn’t love that?
Michael Jackson or Whitney Houston : Neither. I’m more of a Ray LaMontagne girl. I tend to go bluesy, maybe even with a country edge.
Dirty Dancing or Footloose : Dirty Dancing all the way!
Movie Theatre or Loveseat : Gotta have that popcorn and giant screen.
Tea or Coffee : Preferably with a little bit of chocolate and cream. Mm-mm.
Rain or Sunshine : Sunshine and then a little more sunshine.
Skiing or Surfing : Neither. I can’t swim and I really don’t like the cold.
Tree house or Man Cave : LOL. Man Cave.

Choose a challenge...if you dare!

Write a sentence using all these words: joker, fireball, backpack, sticker, hula hoop : The joker grabbed a fireball from his backpack, then aimed for the sticker on the hula.

Write a sentence using all these words: love birds, twizzlers, fireworks, ferris wheel, turtle : The fireworks started and the love birds jumped on the ferris wheel with their turtle and fed each other twizzlers.

And now for the giveaway! YAY! Ms. Blade is offering up four - count 'em FOUR - paper backs for my US peeps. There will be four winners, one book per winner. The first winner will get to choose their book, the second from the remaining three, and so on. Doesn't matter cause they're all good!

US Giveaway
(click the links to check them out)

a Rafflecopter giveaway
Posted by Devon Ashley at 12:00 AM

That was probably the most fun I've ever had in interview. Thanks so much, Devon for the rockin' questions!

Although I'm rethinking sending y'all that photo of me on the motorcycle (yes, that bike was mine). That jacket! Ugh!