Interview and Giveaway with Molly McAdams, Author of Taking Chances

Today on the Writer's Block, we have the spunky Molly McAdams, author of Taking Chances and From Ashes.  Man cave invader. Easily distracted by Scottish men. And her pet peeve is how her hubby handles his pet peeve - interesting. Take a coffee break and get to know this cool chick. 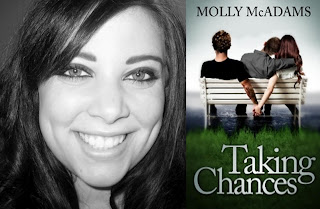 
Tell us your favorite author. Which book is your total fave from that author? Ah, I have so many! But I'm going to have to go with Nicholas Sparks, as for favorite book by him? Now that's just not a nice question! Haha. No way I can answer that one.

Any pet peeves you'd be willing to share? Oooo...yes! When my hubby drives, he won't let people into our lane it they don't use their blinker, but gets mad when people don't let him into another lane even though he doesn't use his blinker! Drives me nuts!

If the Earth suddenly became uninhabital, would you rather live under the sea or in space? SPACE! Because in my mind there are no spiders in space and I don't like fish. haha

Take us through a typical writing day for you. Do you have anything quirky - like you have to have a certain pen to write with, or the desk laid out in a particular manner, does it need to be raining, do you require a certain food/drink/candy to work by? Will you have an absolute meltdown if the atmosphere isn't what you like? Well, I won't have a meltdown, but I want to be sitting in bed with only music playing and the lights off. For whatever reason, if we're watching a TV show I just can't concentrate, or start typing what they're saying instead of what my character's are actually talking about! And I'm a big cuddler, but I do not want to be touched when I'm writing. My poor hubby has definitely been snapped at during those times :(


What do you do when you experience that lovely problem called writer's block? I sit...and I stare. Then I sit and stare some more....it's quite a thrilling process. LOL. Thankfully the only time I've hit it so far, I called my friend to tell her I'd hit a wall, and as soon as I told her I'd hit my wall (after being there for a week) it all came rushing to me and I was able to finish the rest of the book -over half of it- in four nights!

If you could live anywhere in the world you'd like, where would that be and why? Scotland! Because I want to sit there and listen to the men talk all day. Oooo Scottish accents *shivers* yum!

Do you have a secret obsession you'd be willing to share?

Molly is giving away 3 ebooks! Winners have the choice between getting Taking Chances now or waiting for the December release of From Ashes! You can check out my review of Taking Chances or head over to GoodReads to check out From Ashes. Good luck!
a Rafflecopter giveaway

I thoroughly enjoyed this interview! Molly McAdams is an incredible author and seems very down-to-earth person that you can relate to.. it shows through in her writings! Cannot wait for From Ashes!!

the given tweet box in the tweet about the giveaway is for another giveaway. did that make sense?