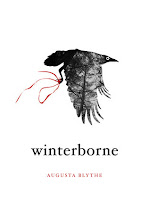 Synopsis: Sixteen-year old Mia Winterborne is destined to be special. Details are sketchy, though, as her dad disappeared with all the answers when she was five. Mia only knows that she'll inherit her kickass superpowers on her seventeenth birthday. Helping Mia prepare for her anticipated ascendancy is Loie Bryce, her best friend and eternal sidekick extraordinaire. The girls' intense friendship has never wavered until now, when Andreas arrives in Salcey Ridge. They both fall hard for the British hottie, who quickly becomes a fixture in their lives. When they discover that Andreas is not who he appears to be, the frightening reality of Mia's powers finally hits home. The nearer Mia's birthday draws, the more the danger escalates and long-buried lies are exposed, putting the girls on a path that they never expected.
Winterborne was unique in that for once we get to witness the action through the eyes of the supernatural's side-kick. Mia has always known that when she turned sixteen, she was going to inherit some pretty wicked supernatural powers. Her dad was a Universal, a human with extraordinary powers that helped keep the Ancients (pixies, leprechauns, hellhounds, etc) in line. As Mia nears her birthday, she and her side-kick Loie are practicing like mad during summer to see if her powers are leaking through yet. But the only thing really going on are all these weird occurrences happening around them, like a bunch of foreign birds trying to divebomb them and icky green slime around their home. I say 'their' home cbeause even though their just besties, Loie has a room of her own at the Winterborne manor. Hey, if your parents died when you were five and all you were left with was a drunk, angry grandmother that didn't care if you came home, you'd stay away too. Lucky for Loie, Mrs. Winterborne was really great friends with her mom and considered Loie her second daughter.
Anyways, summer's dragging on so enter the hottie from Britain that just moved to town. Turns out he's a Universal too, sent to watch over Mia. Ancients have apparently been trying and failing to attack Mia for awhile and now that she's close to ascension, they're desperate to kill her off. They're even willing to go after human Loie, so she gets protection by association.
I wasn't particularly fond of Mia through most of the novel. It's not that she's cruel or uncaring, but she's quite selfish, always focusing on herself. She even got upset with Loie for kissing Andreas, whom they both liked, as if Loie didn't deserve a chance to be the center of his affections. And it doesn't help that Loie keeps Her Heiness on the throne by always doing what she wants and feeding her rapid-growing egotism. But luckily Mia gets smothered with a hefty dose of humility so I ended this novel with a smile on my face and a sense of justice for side-kicks everywhere!
Winterborne had plenty of action, mystery. and paranormal characters popping in to ruin their special moments. Some things were predictable but you probably won't hit it exactly on the mark like you think you will. I'm not ashamed to admit that I started the sequel Ravenstoke the moment I finished this novel because I really want to see where this is going. Now that the powers have ascended, I'm really anxious to see how Mia and Loie take to this new world and deal with the constant threat of Ancients hunting them down...and if we get to see what Sanctuary looks like where a lot of the Universals hide out at.

Add it to your GoodReads and find it at Amazon and Barnes and Noble. Copy provided by Author for honest review.

hadn't heard of this one before - thanks for sharing the review. sounds like one I'd enjoy!

I appreciated the comments on Mia's character being pretty selfish. I don't think I'd like her very well either. Also, it was good to see that you started the sequel right away because that shows how much you liked the first!

I would love to read this book. Thanks for the review.

Thanks for the great review. I might just have to pick this book up.

Loved the review! Found myself chuckling a couple times at your witty writing regarding the book.
Winterborne does sound really good. Will definitely have to check it out!
Thanks!!