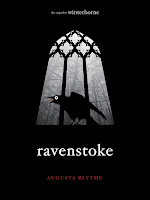 Synopsis: In Winterborne, Loie and Mia's seventeenth birthdays brought more drama and surprises than they ever expected. Now, in Ravenstoke, they are adjusting to the aftermath and struggling to keep those newfound powers in check. When Andreas is called away to England under mysterious circumstances, a new guy is sent to Salcey Ridge in his place. Cian is smarmy and cocksure and Loie wants nothing more than to unleash a hellhound on him. Unfortunately, Cian isn't the only complication in their lives as the girls must also contend with the reappearance of Mr. Winterborne himself and Loie's most dreaded fear of all - a part in the school musical. Can the girls survive the rest of junior year unscathed?
Um...can I just say that I love Cian! If I didn't know Loie could seriously kick my butt I'd totally scrap for him...and that's saying a lot cause I don't scrap. :) (Sorry, I just had to throw that out there)
Ravenstoke picks up right where Winterborne left off. Powers ascended. Boy drama. Messed up family dynamic that surprisingly seems to work. Ancients ticked off that Loie and Mia are still alive.
Loie's training is put on hold when Andreas leaves for a secret mission in merry ol' London, England. Tough luck for Loie cause she spent all of her free time with him learning to use all these wicked new powers, which are infinite and completely untapped. Enter the sly, cool and sometimes brooding Cian come to take Andreas' place while he's away. I know Loie was a little bummed over losing Andreas to Mia, but I've gotta say, I think she won in the end cause as sweet as Andreas is, the bad boy is always more fun. And Cian actually allows Loie to try things Andreas wasn't ready to, like transfiguring into animals and dancing across rapids turning water into ice with each step.  Yum!
After Andreas goes MIA for a bit, boy-lonely Mia gets the bright idea of them joining the drama club so they can tag along on the spring break trip to London to see Wicked, the play they're performing themselves come end of term. As if she wasn't miserable enough being in a play, unlucky Loie ends up having a Stephen King Carrie moment for all the audience to see. Anyways, Loie uses this time in London to track down Andreas in a location she never thought possible - Ravenstoke - and learns a few unsettling things about the new hottie in her life.
Since this is a sequel, I don't wanna give away too much. Ravenstoke didn't have as much action as Winterborne, but I think I actually liked this one better. Loie introduced us to Sanctuary, a hidden establishment for Universals only,  a few new supernatural characters debuted that weren't too fond of our gal (like a kelpie that apparently likes to drag you to your death underwater), and we finally got a paranormal romance that wasn't just being observed through the main character.
So why should you read Ravenstoke? Cool chic with supernatural abilities. Hotty of an interim trainer to swoon over. Creatures that want this cool chic dead. And ebooks are only $2.99 on Amazon, Barnes and Noble and iBooks so how could you go wrong?

Add it to your GoodReads and find it at Amazon and Barnes and Noble. Copy provided by Author for honest review.