I'm in COVER LOVE right now! I've once again got Megan and Nick on the cover, but this time you get the chance to stare into those stunning eyes that just scream Don't f*ck with me. However, that is not Nick on the back. That is the unconscionable Zander Malone, who thanks to the authorities, has his blond locks rockin' a darker hairdo to help stay off the radar a bit. Of course he'll be making an appearance in Nearly Mended, but for how long and whether or not he'll obtain any pleasure while there, I won't say! But he has definitely got some wicked things planned this time around.

Oh...and did I mention it's dual point-of-view this time? Both Megan and Nick will be gracing us with their thoughts and opinions in Nearly Mended. I've dabbled with the idea of getting into Zander's sick head a time or two, but in all honesty, I'm still against it, forcing us as readers to learn only what he wants us to know. 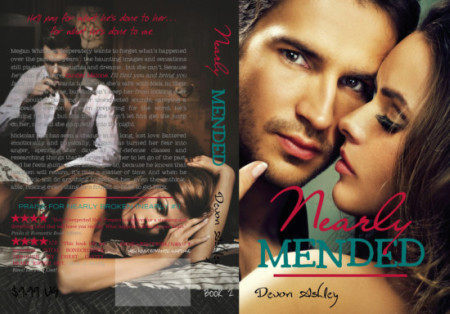 Megan Whitaker desperately wants to forget what’s happened over the past two years – the haunting images and sensations still plaguing her thoughts and dreams – but she can’t. Because he’s still out there. Zander Malone. I’ll find you and bring you back to me. She wants to believe she’s safe with Nick in their secluded new home, but it doesn’t keep her from looking over her shoulder, jumping over unexpected sounds, carrying a concealed weapon or even preparing for the worst. He’s coming for her, but this time, she won’t let him get the jump on her, nor will she go quietly into the night.


Nickolas Ellis has seen a change in his long, lost love. Battered emotionally and physically, Megan has turned her fear into anger, spending her days at self-defense classes and researching things that’ll never allow her to let go of the past. And he feels guilty even asking her to, because he knows that heathen will return, it’s only a matter of time. And when he does, Nick will do anything to protect her, even the unthinkable, risking everything he’s fought so hard to get back.

Haven’t read Nearly Broken yet? Now’s your chance to pick up an ebook for just $1.99! If you'd like to be entered for the $20 Gift Card to either Amazon or the Book Depository, just fill out the rafflecopter below!
Catch my other giveaways in the header text!
a Rafflecopter giveaway

The cover is really well done ( and yes those eyes... she doesn't look happy at all)

thank you for this new opportunity to win too

The cover is appealing, the story line intriguing and one I would love to read. Thank you!

The cover is gorgeous. I loved it! :D

The front of the cover certainly grabs my attention, but I must say I'm loving the back too.

Of course the cover is amazing :) but I am very curious to see what is inside hihi. I want to read it so bad.

I love the cover! Especially the back cover..

Love the cover, and looking forward to read it, can't wait to december!!!!

The cover is beautiful and eye catching! WOW! I love the close up on the cover and the full scene on the back. Very hot models! YUM!

Cover is an eyecatcher. I'd pick it up to check it out if seen on bookshelf..
SAnn Cricket

I need this book to LIVE lol!!!

Thanks for the cover reveal. Neat cover!

That really is a gorgeous cover.

The cover and everything looks and sounds wonderful. Thank u for the giveaway.

hmmmm....
HELLO!!!! I really like the cover. I normally don't read the synopsis but this one I did... and I can't wait to read the book. :) Thanks for the giveaway.

Absolutely Love the cover. It caught my eye immediately. Thanks for the giveaway.

It is a beautiful cover. congrats!

Love the cover. Thanks for the giveaway.

nice cover, especially the back cover..I am truly intrigued with those two :)

Creepy excerpt! I can't help but see the good guy getting hurt for protecting the girl. very interesting :)

The cover is very sensual, artistic and has a sultry romantic feel. I am not one to judge a book by it's cover. I know its a cliché but I do feel it's true.

Thank you for the giveaway. Best wishes.
annfesATyahooDOTcom

The cover is absolutely beautiful and I'm really happy to be a part of the reveal!

Im so excited for this book! LOVE the cover!

love the cover. thanks for the giveaway

I absolutely love Nearly Mended's cover!! I can't wait to read it ;)

I LOVE the Cover,very Sexy

Thanks for the giveaway!

Love this cover! It's gorgeous and very eye catching!

Love the cover! :D Looking forward to reading this!

Seems to be a great book! Can't wait to read it!!!

Thanks for the giveaway!!! :D

Wow he's sexy!! Can't wait to read! Thanks for this amazing giveaway

I love the cover and I think it is very well done! The storyline sounds intriguing and definitely a book I will be adding to my to-read list!

The cover is sensual, she is beautiful and her laying on the bed is very suggestive.

I would love to read this book :-)

I would love to read this book sounds really interesting

I really like the lines and angles the twin profiles on the cover make. My initial impression based on the front alone though would be that the story centres on him.

Looking forward to reading this!

That cover is beyond stunning! The cover of the first book was gorgeous too, and this fits perfectly as a series without being too matchy-matchy :)

That cover is a looker, wanting the book now ;)

She may look unhappy but Zander looks sexy :) Great cover.

This looks fantastic! Thanks for the giveaway!

I LOVE he cover! It's so beautiful! Can't wait to read the book! :D

great cover
thank for the giveaway

This cover is amazing and very appealing! Thanks for the giveaway :)

The cover is looking fiiineeee
Can't wait to read it. Sounds really good!

The cover is beautiful and the book sounds awesome.

i think the cover tell enough about the story...
Great job :D

I absolutely am in love with this cover! I can't wait to get my hands on this one :)

The cover is very sexy. Thanks for having the giveaway.

Love the cover!! Can't wait to read both books!! Thanks for the giveaway!!

I love the cover!!
Thanks for the chance to win!

Really want to read this!

The cover is amazing, the girl look beautifully and I would love to read the book. Thank you for the giveaway!

The cover is alright, I don't personally find the man in the cover attractive though so I am not sure that the cover on its own would grab my attention, but its certainly seductive.

Thank ya as Always for an Opportunity to "WIN" in one of your Fun Giveaways!!


❤ℒℴνℯ❤ the Synopsis of the upcoming 'Nearly Mended!'

Oooh a dual point of view for a romance book, sounds HOT! Thanks for the contest :)

Oh it is so lovely! I've been waiting to see the cover/synopsis of the book :)

Can't wait to see how this next part of the story goes.

Beautiful cover! Looking forward to reading this book! Thanks!

The cover is really intriguing and it makes me want to read the story even more!

Yeah, he's a hottie! Thanks for the cover reveal!

Can`t wait to read the book <3

Cover is really great!
Thanks for the opportunity :)

I like the cover but it would be nice to see the man's face!

Such a nice cover.

That book sounds great! ANd it has such a beautiful cover =)

thank you for the giveaway.

The book and it's cover are interesting. There always seems to have to be a creep in the mix. That's life

looking forward to reading this :)

Very nice cover! As much as I like the front, the picture used on the back draws me in more. I think it tells a story all on it's own. :)

Looks like I will be adding two newbies to my TBR!

LOVE THE COVER!! I love the lighting and the models on both the front cover and back cover. Can't wait to read Nearly Mended :D!

Nice cover, thank you for the giveaway!

Love the cover cant wait to read it ;)

Love the cover...Guy is Hawt!!

I like the chemistry that looks so real on the cover

The cover is very pretty! Thanks for the giveaway!

I really like this cover too, Devon. I like the switch from Megan's eyes to Nick's...hmm... That you gave Zander some face time makes me anxious. I really can't wait to read Nearly Mended!

I'm so excited!! The cover is awesome. Congratulations. You must be stoked!!

Love the cover and I can't wait to read this

I actually like the back cover a lot more :) I really want to read this series now!

I really like the back cover! That should have been the front. It fits nicely with the cover from the first book though, and I love when covers match (nothing irritates me more than covers switching mid-series!).

love the cover,it's gorgeous! and the blurb is awesome. I can hardly wait to start reading. LOL