For Tracey Rooks, life with her grandparents on a Wyoming farm has always been simple. But after her grandmother's death, Tracey is all her grandfather has. So when Eagle Elite University announces its annual scholarship lottery, Tracey jumps at the opportunity to secure their future and enters. She isn't expecting much-but then she wins. And life as she knows it will never be same . . .

The students at Eagle Elite are unlike any she's ever met . . . and they refuse to make things easy for her. There's Nixon, gorgeous, irresistible, and leader of a group that everyone fears: The Elect.

No matter how hard she tries to stay away, The Elect are always around her and it isn't long until she finds out the reason why they keep their friends close and their enemies even closer. She just didn't realize she was the enemy -- until it was too late.


When you attend a university filled with future mobsters and political figures, you better believe the hazing will be a little extreme. 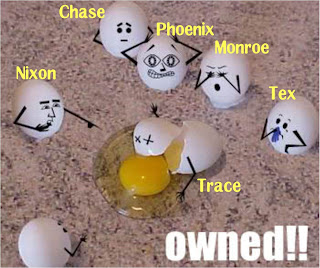 Tracey may think winning the scholarship to Eagle Elite University will permanently solidify a wealthy future, but someone forgot to tell her she'd have to survive all four years to get it. Coming in as the charity case won't make life easy, neither will the ruler of the school, Nixon, and his posse. But Tracey doesn't see herself as charity or someone who deserves to be treated like crap, so when she repeatedly tells Nixon and members of the Elect to go f*ck themselves, she puts herself in a world of hurt.


This was interesting take on specialized Academy life. I mostly loved Tracey. She was strong and stubborn to a fault, but still cried a little too much for my taste. If you're gonna step up and publicly take on the system, you'd better have the balls to do it 100%. Otherwise...well, you get exactly what she got. She showed them weakness and they jumped on it faster than a goldfish dropped in a piranha tank. Some of their brutality I expected (ie. drugging her drinks, starving her, attempted assault) and some I was surprised by its simplicity (ie. egging and dousing with water). The egging seemed more like high school. I'd expect college kids to up their game a bit, like dousing her with water and locking her in the cooler overnight. It's both humiliating and traumatizing.


Nixon gave me whiplash. I wasn't sure whether I wanted to hug him or punch him. I should probably stick with punch since he has issues with people touching him - and it certainly seems to get his attention. He started out determined to humiliate the crap out of her, but began to admire her resistance in a school full of determined followers, so it didn't surprise me this alpha male tried to lay claim to her behind the scenes.


I really loved Elite. Only a few things kept me from giving it a full five stars, and that was some of the lighter hazing and the fact that a very important person in her life set her up and used her as bait. That was definitely my WTF moment of this book. Soooo not okay, and Trace should've had more to say on the subject - particularly rather colorful expletives.


If you haven't checked this out yet, pick it up!