Twenty-year-old Camryn Bennett had always been one to think out-of-the-box, who knew she wanted something more in life than following the same repetitive patterns and growing old with the same repetitive life story. And she thought that her life was going in the right direction until everything fell apart.

Determined not to dwell on the negative and push forward, Camryn is set to move in with her best friend and plans to start a new job. But after an unexpected night at the hottest club in downtown North Carolina, she makes the ultimate decision to leave the only life she’s ever known, far behind.

With a purse, a cell phone and a small bag with a few necessities, Camryn, with absolutely no direction or purpose boards a Greyhound bus alone and sets out to find herself. What she finds is a guy named Andrew Parrish, someone not so very different from her and who harbors his own dark secrets. But Camryn swore never to let down her walls again. And she vowed never to fall in love.

But with Andrew, Camryn finds herself doing a lot of things she never thought she’d do. He shows her what it’s really like to live out-of-the-box and to give in to her deepest, darkest desires. On their sporadic road-trip he becomes the center of her exciting and daring new life, pulling love and lust and emotion out of her in ways she never imagined possible. But will Andrew’s dark secret push them inseparably together, or tear them completely apart?


I laughed, I cried, I perfected my O face. And I was completely jealous that Andrew Parrish wasn't mine.


First off, let me begin with how gorgeous that cover is. The girl's a beauty and it immediately draws you in and makes you envious. However, that envy was short-lived as I journeyed through The Edge of Never. At first, I felt the beginning read a little slow. I didn't realize until later that the problem wasn't pace, it was her life. Cam was absolutely miserable, and just following along with her made me realize how unhappy she was, just how mundane everything around her was as she dealt with the aftermath of the past two years. Her first boyfriend, who she lost her virginity to, died in a car accident, her next boyfriend cheated on her, her alcoholic brother was in jail 'cause he killed someone driving drunk one night, and her father cheated on her mother and they got divorced, so now she was tramping around dating everything in sight. It wasn't until she got fed up with everything and boarded the bus to nowhere and met Andrew Parrish, that Cam seemed to come to life and her story began to excite me. And then I appreciated the way the beginning read, 'cause if it hadn't, I never would've realized what an impact Andrew had on Cam's spirit.
Andrew Parrish: Sexy. Protective and Possessive (in a Good Way). Sexually Confidant. Secretly Passionate. And there were soooooooooo many times I wanted to give Cam the boot and take her place. The best part of all was that Cam didn't even know why he was trying to keep her attention in the beginning, and the more time they spent together, the more he fell for her. They both had their reasons to be stubborn about taking their newfound relationship further, and the angst was literally ripping my heart to shreds. Both Cam and Andrew had fallen on hard times, and both deserved something positive to happen in their lives, so you can't help but root for them as one problem after another tests their strength. By the end, I think I shed enough tears to fill Lake Pontchartrain.

J.A. Redmerski has won my heart all over again. The Edge of Never is by far the best of her work. Okay...I may be a little bias 'cause I love books heavy on angst, where the couple doesn't just throw themselves into bed, but eventually gets there and gives me some of the hottest scenes that perfect my O face and activates the launch sequence for book boyfriend jealousy. Check it out, you're gonna love it. And peeps, this novel is for the 17+ crowd for language and very hot, yummy, descriptive sexual situations.

FAVORITE QUOTES
Oh, this is going to be fun; he actually thinks he's teaching me something.
Dilemma? Let him have his way with something simple, or keep getting my way and him torture me later? Hmmm. I guess I'm more of a masochist than I thought. 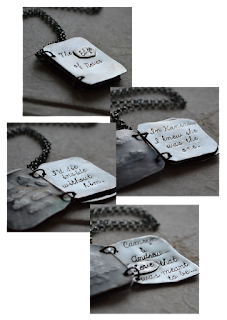 US / CANADA ONLY.
As part of the tour, JA Redmerski is offering 1 SIGNED PAPERBACK, 1 EBOOK (through Amazon or B&N), and 1 STERLING SILVER NECKLACE!

ABOUT THE AUTHOR
Author of THE DARKWOODS TRILOGY and DIRTY EDEN, mother, werewolf & zombie fanatic, book addict and a happy hermit obsessed with the Universe. Oh, and AMC’s "The Walking Dead".
Addictions: Starbucks every morning, trolling Barnes & Noble’s shelves once a week, detesting winter, shopping flea markets and preparing for the collapse of society as we know it. Do I own a tin foil hat? Maybe. :-)
I was born in Arkansas and have lived here most of my life, except the couple of times when I lived in Pennsylvania. I started my first novel at the age of thirteen and have been writing something ever since. Generally, I love characters in life and on paper. I pay attention to people, especially those whose personalities make them different from the rest of us: the drug addict roaming the Laundromat that talks to himself, the young, inattentive mother in the park with the meanest kid on the playground – (the entire cast of ‘Swamp People’) – characters fascinate me and I hope that it shows in my literary work.
Website
Twitter
GoodReads
Pinterest
﻿

Thanks for the support, Devon! :-)

I love J.A.'s books and this one looks like another winner. Can't wait to read it!