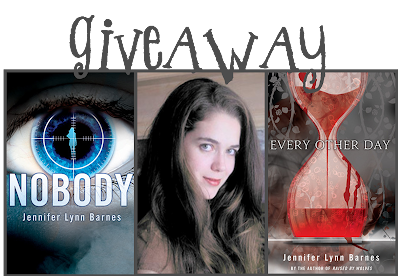 Howdy Gals and Gents! Egmont USA is offering up a sweet giveaway for my peeps - a paperback of Every Other Day (see my review here) and a hard copy of the upcoming Nobody, releasing late January! Check out the descriptions below...

Every other day, Kali D’Angelo is a normal sixteen-year-old girl. She goes to public high school. She argues with her father. She’s human.

And then every day in between . . . she’s something else entirely.

Though she still looks like herself, every twenty-four hours predatory instincts take over and Kali becomes a feared demon-hunter with the undeniable urge to hunt, trap, and kill zombies, hellhounds, and other supernatural creatures. Kali has no idea why she is the way she is, but she gives in to instinct anyway. Even though the government considers it environmental terrorism.

When Kali notices a mark on the lower back of a popular girl at school, she knows instantly that the girl is marked for death by one of these creatures. Kali has twenty-four hours to save her, and unfortunately she’ll have to do it as a human. With the help of a few new friends, Kali takes a risk that her human body might not survive . . . and learns the secrets of her mysterious condition in the process.


Pretty sweet, right? Sorry, but this giveaway is only offered for US and Canada residents. Good Luck!
a Rafflecopter giveaway

Thanks for this awesome giveaway! I love Jennifer Lynn Barnes! I am eagerly anticipating the release of Nobody! She's one of these authors that I will read anything she writes! :D

Thanks for this awesome giveaway!! The books sound GREAT!!
Ashley A
ash_app@hotmail.com

Thanks for the chance to win! I have had Every Other Day on my TBR list! Just put Nobody on with it!

These books sound fabulous - thanks for the opportunity to win them!

Thanks for the awesome giveaway

The More the Merrier said...

Both books sound great! Thanks for the chance:)