How can someone want me dead if no one knows I'm alive?

Claire has spent her entire fifteen years trying to get someone to notice her. Classmates, teachers, people that drive cars. Even her parents have to leave a sticky note on their back door to remind them to retrace their steps, just in case they come home without her. And sadly, they do it all the time. Because Claire is a Nobody - a being with no energy, unrecognizable without strenuous effort - she just doesn't know it yet. Nix has spent his entire existence embracing his Nobodyness, trained by a secret society to use his ability to kill the Nulls, cruel, heartless people that bring harm to the Normals.

When Nix is sent out on his twelfth kill to kill an Omega - an extremely dangerous person that requires a kill from a distance - something strange happens to him. For the first time ever, he questions his assignment, and Nobody's are taught never to question, 'cause they're nothing. But Claire doesn't seem like the typical Null, or she's by far the most cleverest Null of all, the way she can make him doubt her Nullness. But once he fades into nonexistence and Claire can still see him, he spares her life and begins to question why his society sent him to kill his own kind. Until he realizes why they did - only a Nobody can see another Nobody. Now on the run with Claire from his society's Sensors - people with abnormally strong senses that can almost pinpoint the presence of a Nobody - he must retrace his kills to search for a pattern, 'cause he no longer believes they were all just Nulls, and in order to be free of them, he must figure out the society's true objectives.

I was attracted to Nobody for it's unique concept, of assassins being people with such little energy they can slip past people easily, and when they fade, can completely fall off the radar and pass through solid objects, even taking things into the fade with them as it becomes an extension of their existence. And for that part of the novel, I was really intrigued.

The main problem writing this type of story is making its characters relatable and likeable. Were Nix and Claire relatable? Nix, no. Claire, maybe, to those who flew through high school under the radar, and felt lonely in the process. As for likeable? Claire was somewhat, but the girl was so starved for attention that she literally ran and threw herself before the man trying to kill her just because he took notice of her. That's just crazy. But there's a tiny bit of likeablity in her naivety and optimism...'cause she just knew that someday, someone was gonna pay attention to her. And who thought it'd be an assassin, 'cause like she thought, how could anyone want her dead when nobody even knows she's alive?
So with relatability an issue, it's no wonder I got all the way to 70% before I truly begin to care about the two Nobodies, 'cause up until that point, even their speak and thoughts were coming off quite depressing. Especially the way they had to convince themselves they were nothing just to enter the fade. It wasn't until they were given a new purpose that their story began to shine like the energy emanating off their bodies in the fade. So should you read Nobody? Yeah, it's worth a read on the assassin concept alone, just don't be surprised if the two characters and their fast paced love story reads a bit slow. For me, Nobody was good read, it just wasn't as good as Ms. Barnes other books.

ARC provided by publisher for honest review. Also, I currently have a giveaway going for two of Ms. Barnes' books, Nobody and Every Other Day (4 DreamCatchers!), which is definitely worth your time. Giveaway ends January 31st! 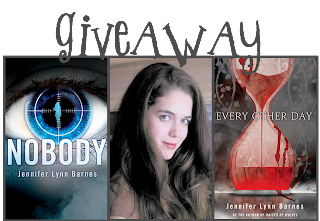