So I’ve decided to take Ordained (The Immortal Archives, #1) on tour. Yeah, I know, it’s been out for a year now. But Ordained was the very first book I published and I had absolutely no idea of how to go about really promoting it. The {Teen} Book Scene did a great job setting up a small tour, but it really only involved about 5 or 6 bloggers. So now I want to go bigger. But since Ordained is already published, I’m going to throw a few guidelines out there. If you think you’re interested, please consider the following before signing up: 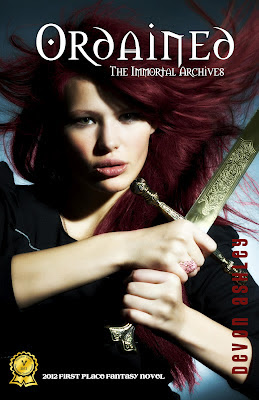 Abby Sorrensten likes to play rough. Ripping the horns off the foreheads of demons, manipulating lightning and setting things on fire with the flick of your wrist can give you a serious rush. So she probably wasn’t the best choice for the Order’s experimental training program. Thirteen years of isolation, lack of affection and a bruised and broken body from horrendous training sessions creates more than just an exceptional fighter. It creates an evil within - an evil responsible for several deaths the night she left.

Two hundred years later Abby resurfaces as the very thing the Order trained her to kill: a vampire. A mythical demon has set his sights on the school and only the ordained hunter has the powers to face it. Unbeknownst to the Order, Abby’s their precious ordained one and their only chance for survival. As much as she would love to leave them hanging, she’s not willing to risk the life of Emily, a fellow friend and hunter also fed up with the organization.

But for Abby, locking herself away in a fortress with angry descendents of those she killed causes suspicions and tensions to run high. Abby must learn the demon’s weaknesses for battle before the Order learns hers.

The main plot of Ordained revolves around Abby but you'll find all four main characters have their own issues to deal with. If the synopsis appeals to you and you're okay with the guidelines, then please sign up below!