Wanna win a book to have in time to read over the Christmas holidays? Then read on! 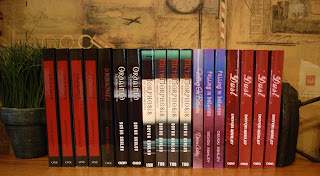 click to enlarge
So it's time to do a little winter cleaning. I've got lots of older copies of my books collecting dust on the bookshelves. Some of these are ARCs, some are proofs, and some just have older covers. I'm gonna tier these books so you know what you're getting into.
Tier One: ARCs 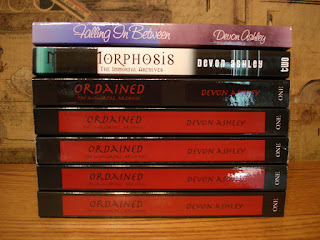 Interiors: ARCs
Covers: In Progress / Not Final﻿
These books are true ARCs and will contain grammatical errors in the story. Also, none of these have the final cover on them. Ordained in particular has a lot of errors because it was my first book and I was totally wet behind the ears. So if lots of mistakes bother you, I don't suggest you enter to win one of these. Also, I remember going in and making minor changes, but they weren't significant enough to alter the story. Falling In Between has some mistakes, but not nearly as many as Ordained. Metamorphosis is actually the final copy inside, but the outside cover was in progress, so I decided to stick it in this tier.
***If you win one of these, I'd appreciate it if you'd just throw it away when you were done.***
Tier Two: Almost Final Copies 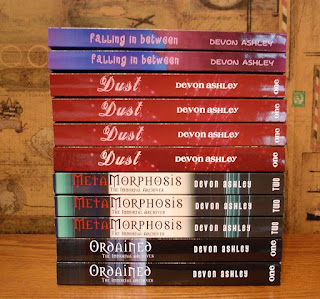 
All of these have the final copy inside, but have covers that I didn't want to give out to winners. Ordained's cover had a dark print run and wrong font on 'one'. Metamorphosis was printed on a thinner paper, making the book thinner, so the spine bled over the front a little. The same thing happend to three of the Dust books; the fourth had a dark print run. Both of the Falling in Between books had lines mysteriously show up on the sides of the spine.

Thanks for the giveaway! Much appreciated. :)

Um, thanks for te giveaway!! But...I really hope I'm not picked because I just realized that it's not international. *sigh I got a little overly excited and forgot to check before I entered. -.-

thanx for the give away