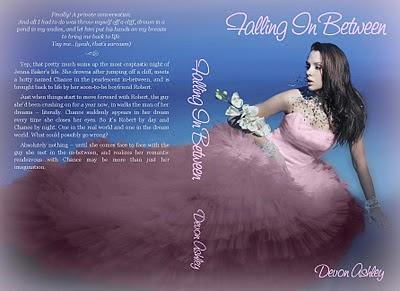 So this is the cover for my new YA Contemporary Romance Falling In Between. Just what I wanted - dreamy and romantic!


Finally! A private conversation.
And all I had to do was throw myself off a cliff, drown in a pond in my undies and let him put his hands on my breasts to bring me back to life.
Yay me…(yeah, that’s sarcasm)


Yep, that pretty much sums up the most craptastic night of Jenna Baker’s life. She drowns after jumping off a cliff, meets a hotty named Chance in the pearlescent in-between and is brought back to life by her soon-to-be boyfriend Robert.

Just when things start to move forward with Robert, the guy she'd been crushing on for a year now, in walks the man of her dreams – literally. Chance suddenly appears in her dream every time she closes her eyes. So it's Robert by day and Chance by night. One in the real world and one in the dream world. What could possibly go wrong?
Absolutely nothing – until she comes face to face with the guy she met in the in-between, and realizes her romantic rendezvous with Chance may be more than just her imagination.
Falling In Between by Devon Ashley
Exp. Publication: Valentine's Day 2012
Blog Tour Sign Ups HERE
Click on Add To GoodReads and enter to win a copy starting October 1st!
Wanna read a snippet?

Email ThisBlogThis!Share to TwitterShare to FacebookShare to Pinterest
Labels: blog tour, Falling In Between

that is GORGEOUS. i just added it to my to-read list!

Wonderful news! :) She is wearing such a gorgeous dress, wow!