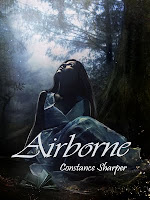 Synopsis: Avery knew she had a knack for attracting trouble, but even she is shocked when a six-foot-something harpie shows up on her doorstep. Coping with the existence of a mythological race? Okay. Unwittingly finding herself in the middle of a vicious harpie conflict? A little less okay. Having to rely on an arrogant harpie boy who gets under her skin? Now that is something Avery isn't sure she can handle.
Character Post
Meet Avery Zane of the Airborne Saga.

My brother Chase always told me that living sixty miles north of Nowhere, Alaska, would take a toll on my sanity. I always figured that was just him gloating because he lived in sunny California. After all, he recently reminded me of that fact when I visited him during my summer break. At the time, I didn’t think my boarding school, Mayweather Academy, was actually that bad.

Well, except for the fact that the campus pretty boy (my kinda ex) won’t quit harassing me and that my best friend actually wants to date him. But I didn’t think Mayweather alone would drive me insane. It turns out Chase was right and I was wrong again.

Why the sudden doubt in my sanity? Well, not even one day in to fall semester and I had a stranger show up on my door step. That’s not the weird part. This stranger is apparently a harpie. Not like the tiny bird harpie but like a big man harpie. He is crazy tall and looks pretty human except for the huge wings. He was cute but his bipolar temperament was mind boggling. I barely got out the door before he started in on me.

So get this: Mason, the mythological harpie creature, cornered me at Mayweather. He said that the last time I was visiting Chase in California, I accidently picked up something that belonged to him. Mason said I picked up a harpie amulet.

You think that I would know if I picked up one of those, right? I didn’t. I went to the beach for the Fourth of July. I started looking for souvenir shells or stones. Out of one hundred rocks on the beach, I picked up one that looked shiny and BAM—harpie amulet.

I haven’t even hit the strangest part. Yes, it gets stranger than crazy birds and magical amulets. Mason came to the conclusion that I didn’t just pick up the amulet. I picked it up and broke it. Then when it broke, the magic inside of the amulet suddenly ended up inside of me. So now, he claims, I have magic in my body.

Mason claims that I need his help to get the magic out.

He claims that other harpies will be coming to kill me if we don’t get the magic out.

He claims that my time is running out.

How would you take news like that? I just doubt my own sanity. And even though I don’t want to believe it, some part of me wonders, what if he is right?
Add Airborne to your GoodReads shelf.

My Take on Airborne
This is the first book I've ever read with harpies and I was pleasantly surprised where Constance Sharper took the story. The characters were engaging, the romantic attraction between characters wasn't love at first sight but built slowly through the story and the harpy civilization was believable.

Avery was just your average girl hanging out on the beach when the simple act of picking up a stone threw her into the world of the harpies. When she broke the stone, the magic within seeped into the nearest organic life it could find - Avery - and unfortunately, the magic within her shines bright and attracts all sorts of harpies who want the magic for themselves.

Mason is the first to arrive and discover the magic has left its' protective stone. He's willing to help her get it out but isn't optimistic it can be done without her death. Of course, Avery's instinct is to run from the winged man but when a separate group of harpies crash in and are willing to cut it out of her immediately, she has no option but to trust him.

Constantly on the run and in and out of the enemy's grasp, desperate acts to save her life cause Avery to use the power inside her. But it comes with a price. With each use, the magic grows stronger and spreads further across her body. The magic was not meant to bind to a human - one use too many will end her life.

About a third into the book, the story just took off and didn't stop till the end. The story felt resolved but left a cliffhanger that'll make your mouth water until Grounded is released.

The winner of this giveaway will be gifted an eBook through Amazon US. You must have a valid email address to receive the gift. *Airborne is available on Amazon UK and DE, so international entries with access to those accounts are welcome. (You don't need a Kindle - Read it with a Free App. on your computer or other device)

*Please note (via Amazon): If the giver and the recipient do not live in the same country, the book may not available to the recipient due to copyright restrictions. In these cases the recipient will be given the option to request an exchange for gift credit on their Amazon.com account during the redemption process, or they may contact Customer Service for assistance in exchanging the book.

Good luck to all that enter. As always, the winner will be chosen by random.org.

thanks for the giveaway im looking forward to checking this out.

Thanks for the giveaway! This book looks great.